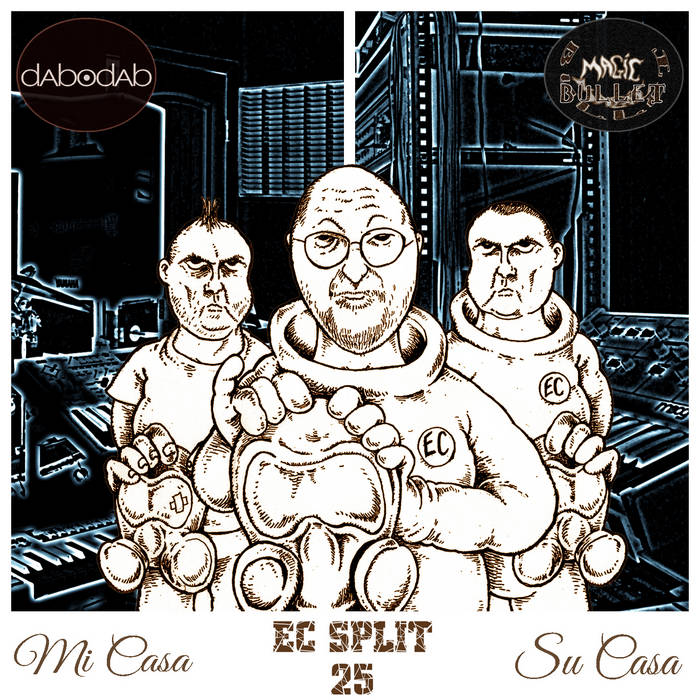 EC Split 25: Mi Casa, Su Casa
by dabodab and Magic Bullet
an Electronic Cottage release
[Please note that each track on the album has its own artwork panel]

Spoken word: Marilyn Baker, telling about the houses she grew up in.

Magic Bullet are Mick Magic & Skit Zoyd, who play and do stuff to; two telephones, a tractor, the Irish sea and its winds, two vacuum cleaners, a boiler, a steam iron, several running taps, a tumble dryer, a washing machine, two dehumidifiers, a dishwasher, a cooker hood, a kettle, a microwave, a fan oven, a wind-up gramophone, a fan, a television, 2 Solpadeine tablets dissolving in a beaker of water (*other painkillers are available!), an extractor fan, a shower, a WC, an electric toothbrush, a hairdryer, an electric shaver and its cleaning / charging station, ‘whistle lips’, a toy xylophone, a toy recorder, a battery operated guitar toy, a Peppa Pig trumpet toy, a paper shredder and a printer.

I live in a house called Asgard in the village of Knott End-On-Sea in Lancashire, England, as does Skit, my partner in the band. But we do not live in the same house, his is somewhere beyond several trans-dimensional voids in a parallel reality. We are told by an ageing scientist that there are 25 such parallel dimensions, and in one of these, our house is occupied by an American writer of some repute. This is the story of his visit to our Asgard, and how the portal device he brought with him allowed us to look back through in to his. And he did not just wish to see our house, he also wished to hear it. What else could we say but “Mi casa, su casa”...