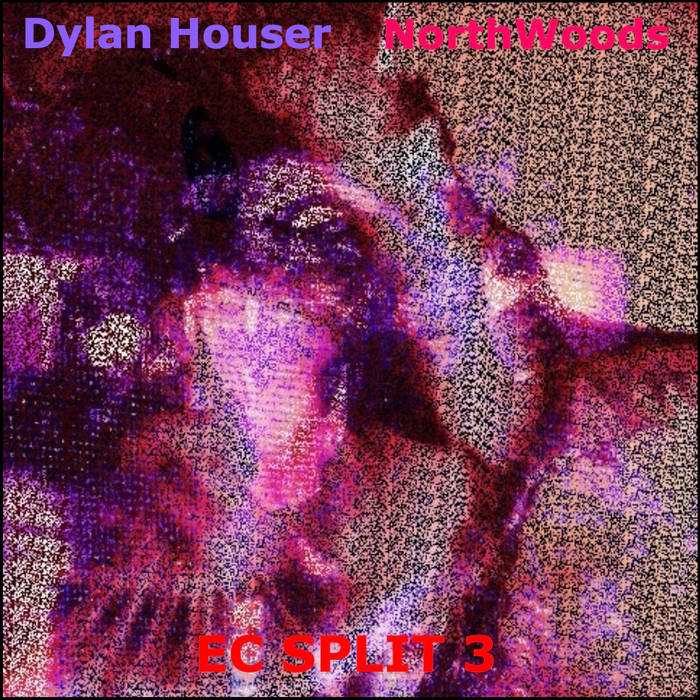 THANKS: Jeff Elertsen, Colette Parisa, Bobby Clock (R.I.P.), and of course, to Charlie Kramer, Hal McGee, and the rest of the EC CREW

Home page: www.northwoodselectro.com (includes a link to the Github page with ChucK code).

Many thanks to Hal and Dylan! Also thanks to my family who tolerate many hours of me with my headphones on, as well as occasional blasts of industrial noise when I accidentally divide something by zero.

I haven’t heard much of Dylan Houser’s work and was pleasantly surprised by the lo-fi psychedelic ambient-noise-doom that characterizes his ‘side’ of this Split. I like how the bass on ‘Carnival Of Rigid Smiles’ lays down fuzzed doomy rocking riffage as atmospheric notes weave a droning, feedback laden path. ‘Erratic Warrior’ is all mood and atmosphere focused, creating a pleasantly haunted ambient-doom soundtrack with a rickety/spectral rhythmic pulse, marked by crashing and echoing bass chords. Spooky stuff. Cool crackling, string mangled finale too. ‘The Village Idiot Of Tomorrow’ takes a thematic turn, starting off as a swinging doom rocker, but soon starts to crank out sinister, psychedelic soundscape licks as a repetitive doom bass groove keep things rocking. Finally, we have the high intensity, ambient-noise chaos of ‘Freaks Eternal’. A barely discernible bass pattern provides the rhythmic pulse for this noise-psych soundscape excursion. Cascading waves of eerily dreamy fuzz and a light sense of melody create a psychedelic hell ride that is simultaneously meditative and harsh. Overall, kind of like Sunn O))) for the experimental set.

I was very interested in Charlie ‘NorthWoods’ Kramer’s set after reading in the credits how he is “creating noise and music from computer code, busted guitars, and old or homebrew electronics.” Sure enough, it is the most basic of homebrewed sounds that make for the fun and charm of Charlie’s set. ‘LiveKitchen’ sounds like percussion played in a huge cavern with the resulting rolling and fading echoes. ‘Game’ is similar but mechanically jazzier, ultimately locking into a hectic machine shop deluge. ‘Wait’ features ambient static pulses that dance across the left and right channel, alternating between airy dance grooves and ambient drift. I like the toy like electronic grooves that are both martial and helter-skelter on ‘120BPM’, which is also colored by a pleasantly reflective bell melody. I love the Mario Bros meets ambient noise in an industrial robot dance club on ‘Dancemetal’. ‘Disco’ feels like pogo stick dance club electronica peppered with, and eventually overcome by whirly swirling oscillations. ‘Smiled’ is both action-packed and sedate, with its sci-fi minimalism, effects turmoil, and electro grooves. I like the shortwave voices from another dimension on ‘Vmail’. ‘Reach2’ sounds like an electro psychedelic carnival collage. And ‘Porch’ is an edgy, ambient breezy finale. Lots of fun sounds!