by Michael A Cosma / Mini-Mutations 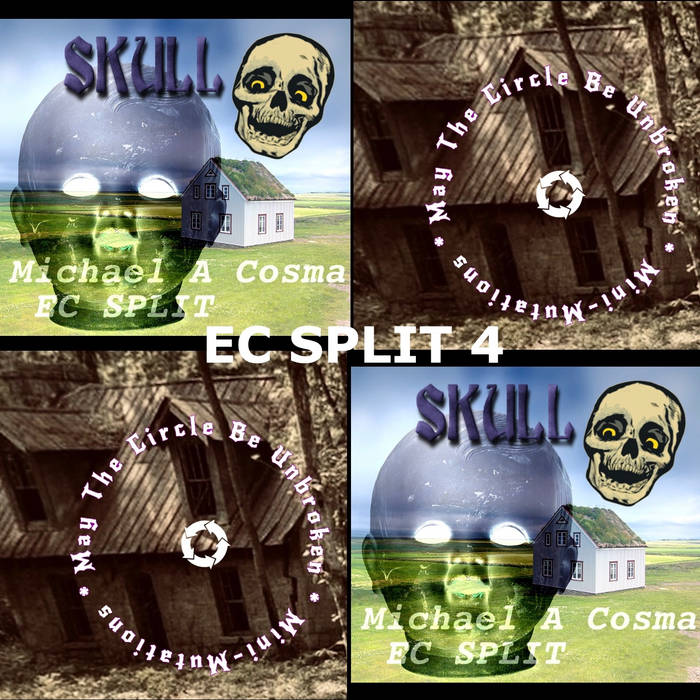 SKULL by Michael A Cosma (tracks 1-7)

May The Circle Be Unbroken by Mini-Mutations (tracks 8-12)

Written & Recorded during August of 2020, while working in The Lava Lamp Lounge in Salem, Oregon.

Special Thanks to Michael A Cosma, who created the other half of this piece, and who inspired the direction of this half, and Hal McGee, who arranged for this split to happen, as part of a larger Electronic Cottage Split Release series.

Michael Cosma’s ‘side’ of the split features an excellent morphing and mixing of contrasts. ‘Death By Death’ opens with spacey soundscapes, quirky electronica and fun efx’d voices…. “Death By Death… Kick Ass!!”. I like the strange blend of edgy ambience and video game soundtrack intensity. ‘House Of Hell’ is similar but with the sensation of being on some isolated beach with waves washing on the shore, as electronic pulsating crickets whiz by, and colored by weird robot voices and jarring blasts of electronica. I love the way ‘Skull’ swivels between and blends dreamy ambience with more quirky electronica, with an acid rock injection from guitar, and bits of tension from a periodic, brief heartbeat rhythmic throb. ‘Demented’ is like an off-kilter, high octane, drum centered free-jazz jam for the electronica set. ‘Terror Eyes highlights an electronica enhanced dreamworld, with a delirious blend of ripping guitar leads, misty atmosphere, flying saucer effects, and lost souls singing. ‘Black Widow’ is a similarly wigged out glom of psychedelic electronica and creatively mixed collage fun. And ‘Inside Out’ is a lightly musical style of sci-fi and meteorological ambience and effects. Good stuff, I really enjoyed this.

Next up is Austin ‘Mini-Mutations’ Rich’s spoken word story titled ‘May The Circle Be Unbroken’. Austin tells the tale reading aloud with himself as narrator and all the character parts. And what is it? A murder haunted house sci-fi mystery! There were occasional light sound effects up at first once the body is found things get interesting as Austin adds a cool musical soundtrack and fun creepy effects. Now it’s more of a one-man radio play. Some of my favorite soundtrack music is on the ‘The Cellar’ chapter, with its eerily deep space melodic electronica. I wasn’t expecting a ‘play’, so this was a refreshing twist!