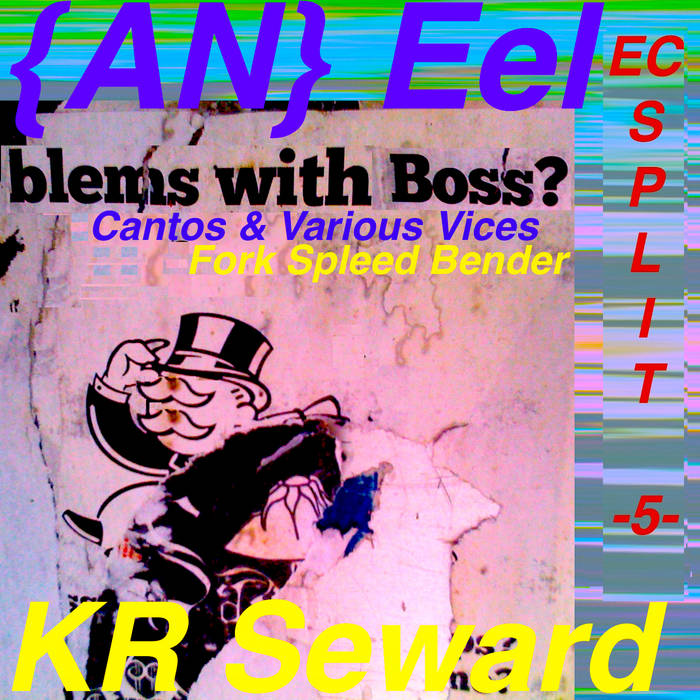 EC SPLIT 5
blems with Boss?
by {AN} Eel and KR Seward

I was happy to find out about the EC Split project and happy to find it was with KR Seward - Two occasions which are new & agreeable to me ~! So as these things often do, the idea of Cantos & Vices emerged from the fog to form a skeleton or framework to dash along with - I created this with the intention of having a single long track, but life had other plans - I'm pleased to feature on this effort with KR & Want to thank them & Hal for considering me for this project -

PROGRAM NOTES : This audio was created entirely using Audacity & was influenced to an unusual, perhaps even excessive degree, with the saliva of birds, which is why it's so darned sticky. I'd like to thank the ANTIFA & Opponents of Tyranny in their efforts as well.

Created by KR Seward late July-early August 2020 in Two Bays At The Moon and New Bern Cavern (each a provisional annex of the TaseSpime Confabulatory) and the Home Office Khasmatron (intracranial central control & sand barren substrate for the TSC).

EC Split 5 brings together {AN} Eel (sometimes known as Neal D. Retke) and KR Seward. Part of the fun of writing about these Splits is getting introduced to the work of fellow EC group members and this is my first exposure to both artists.

{AN} Eel’s ‘side’ is titled Cantos & Various Vices. I was especially eager to dive in when I read in the Program Notes that the recordings were influenced, “perhaps to an excessive degree, with the saliva of birds”. My kind of artist!!
Neal’s varied vocalizations give his recordings their distinct character. ‘Canto 6’ is a short opener that begins as a percussion rumination with a brief voice effect finale, hinting at things to come. ‘On The Eve Of Culthbert’s Special Porridge Feast’ (awesome title!!) features a playful kazoo or fuzzed oboe like melody, that later sounds like it might be electronic, or perhaps treated instruments, or both?! Whatever it is it’s a great sound. But we’re also treated to a vocal combination of merry but devotional la-dee-da singing and strange vocalizations that remind me of John M. Bennett’s voice fun on EC Split 2.
I like Neal’s crazed yet merry singing/chanting/howling style on ‘Canto 7’, sung to the atmospheric twang of some jawharpy string strumming. ‘The Belgian Foot Thing’ includes a fun, zany, jazzy, gurgling organ jam, and what sounds like Neal’s take on scat singing, which is soon joined by rattling clatter percussion. ‘Canto Of Lake And Fire’ is by far the longest of Neal’s tracks and is like a more fleshed out version of ‘Canto 6’, with his quietly sparse percussion and singing that sounds like a cross between shaman chant and drunken sailor. But it’s contemplative, in a strangely chaotic way… What sounds like a toy piano soon joins in and cheerfully jams as the percussion continues its ambient exploration and the various offbeat vocal styles and breathy effects chime in. ‘Double Stash Iterations’ is the first time we hear actual words, being a cool collage of multi-layered spoken word phrases. And ‘Canto 8’ wraps up {AN} Eel’s set with merrily ethereal chant singing and a ghostly cat howling that’s the coolest voice effect of the set.

KR Seward’s ‘side’ is titled Fork Spleed Bender and kicks off with ‘X-325’, a rumbly, droney, minimal meditation embellished with lightly whirring and buzzing electronics, plus spaced out mechanical and grating effects. ‘Out Kew’ conjures up images of hovering flying saucers, and the sensation is variously like being inside and outside the vessels. It feels like one big continuous drift and fade among the image of the saucers in space and meandering aimlessly in some alternate dimension. Really cool alien soundtrack and soundscapes piece. This theme continues in a more abandoned but active engine room direction on ‘Gorbin Quarterspeed’, with its laboratory electricity and layers of incessantly rumbling drones and soundscapes. I really like the blend of outer space and hallucinatory spectral world vibes.
Finally, ‘Ell Arr Won’ shocked me out of my reverie with its high volume and high-pitched symphony of semi-melodic squalls, making for a terrific mixture of music, noise, and intensity.