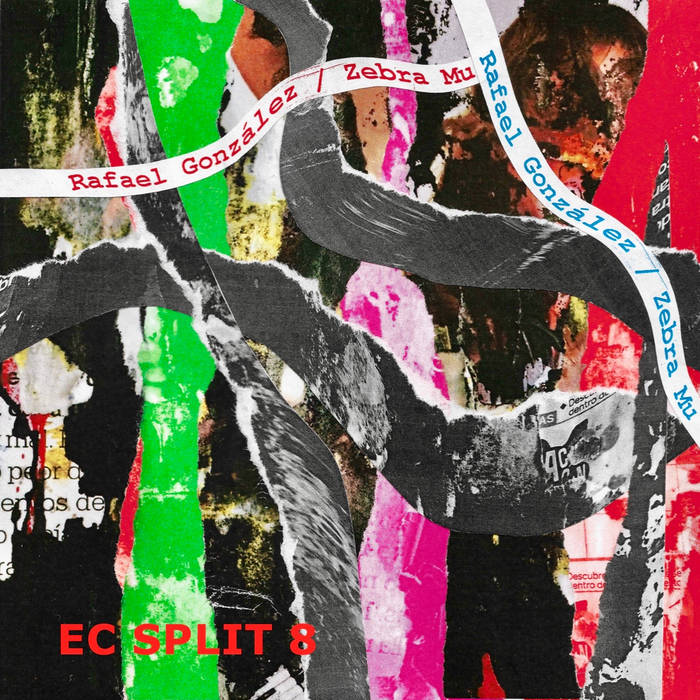 EC Split 8 features group members Rafael González and Zebra Mu (aka Michael Ridge). I’ve heard very little of Rafael’s work and none of Michael’s, so I’m pleased to get acquainted with their work. The two make a good pairing, both creating sound collages, though both are very different from one another.

Rafael’s first track is a cut-up collage of static, tones, and radio/television samples. I like the way he deftly slices and dices, setting a steadily flowing ‘groove’ with static, music and voices. It’s a nifty balance between frenetic chaos and Collage ‘n’ Roll. About halfway through things get briefly spacey before transitioning to frequently shifting sequences… a noise blast here, a flurry of voices there, flying saucer and ghostly effects, water drippy gurgly effects. Lots going on! The next track is similar but more hyper herky-jerky, with cut-up collage channel surfing and more of that noise and samples ‘groove’. I found my head bopping at times to what I’ll be darned ‘feels’ like a beat! But oh, that shrill piercing electronic cricket at the end!
After a lightning quick voice manipulation, we’re treated to a glom of what sounds like crackling paper, static waves, string manipulations, toy instruments, alien oscillations, and voices. ‘Microcassette (I Need A Compass)’ is Rafael’s final track and my favorite of his set. It’s a fun collage of Japanese and other language voices and singing, plus lots of radio. It’s humorous, artfully/imaginatively collaged, and the result is like one big psychedelic sound-art brain sloshing.

Zebra Mu’s ‘side’ is a single 30-minute piece titled ‘Answering Machine Messages For John And Junk Metal Tape Loops’. An underlying drugged, wavering, looped ‘song’… it sounds like a misty blend of rock songs… provides the anchor for a succession of answering machine voices. If this is Michael’s answering machine, he gets some interestingly incidental calls. There’s also an ongoing flurry of what sounds like backwards effects that feel like knives being hurled lightning fast. The overall sensation is simultaneously spectral and lysergic. It’s fairly low-key for a while but near the halfway mark the volume and intensity level kicks up dramatically, until we find ourselves in the midst of a high-octane collage battle of metal, clatter, scrapes and scratches. Similar to Rafael, Michael also creates of sense of chaotic rhythmic flow, as if the cast of the stage show Rent got into a rumble in a Cuisinart.
LOTS from both artists for the attentive listener to wrap their heads around!