by Al Margolis / not half 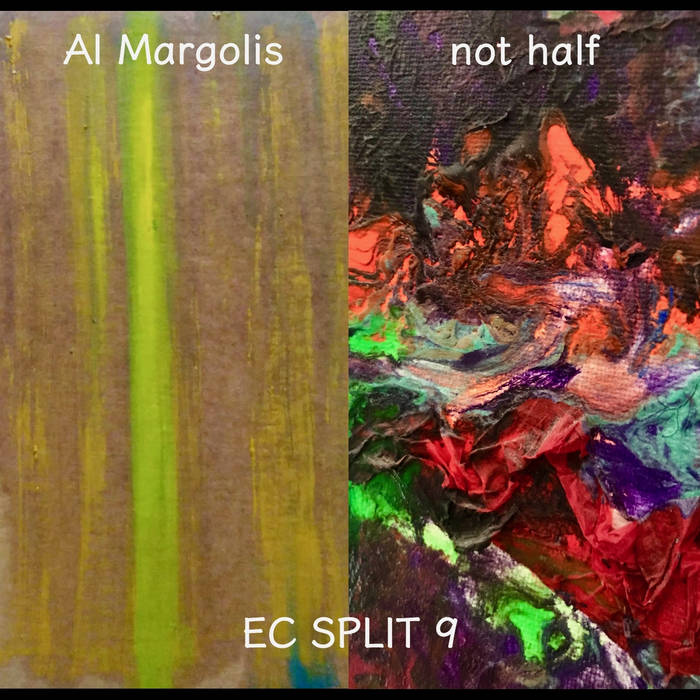 EC SPLIT 9
Al Margolis and not half

I have experienced Al Margolis in live performance and his two contributions to this set immediately brought to mind how he created his sounds during those shows. I recall Al stretched belly down straight out on the floor, putting his entire body into play as he took his quietly developing sounds where they needed to go. Putting those images out of my mind for a moment, I’m hearing on the 12-minute ‘al4haldrums’ what sounds like the slow moan of creaking doors, seamlessly interspersed with crackling waves, and even identifiable percussion taps, and near the end of the piece it’s almost like percussive, crackly, scratchy water flowing. Al quietly and subtly scratches, drags, tickles, and in various other ways manipulates the percussion, saxophones, and ‘objects’ in his employ.

The nearly 18-minute ‘al4halvoices’ is relatively action packed, creating a similar flow, but with a breathy, drawn out saxophone blow. And by ‘breathy’ I mean you can hear the sax but the sound is more blow/breathe based. The sounds vary and combined with weird whiney voicings, at times sound like a fly buzzing around a solo sax player who is stuck between short wave radio stations. At times it gets a little symphonic, with the fly becoming a swarm, though overall the sax manipulations and voices quietly flow and evolve, with the focus throughout being on SOUND. And all throughout the images of Al performing his sounds kept popping back into my head. (He was scheduled to perform here again this past April but, y’know…)

Al Conroy’s work is new to me and his contribution, titled ‘winsomeness’, is a single nearly 30-minute piece. Field recordings of a gently flowing stream set the pace for a haunting electronic soundtrack. The music starts off with a Residents Mark Of The Mole vibe, though with a wavering psychedelic edge. I like the way the music develops, from eerily supernatural to spaced out contemplative. But the music is a multi-themed soundtrack, the stream being the only constant. The music finishes, only to shortly after start again with a more eerily sinister theme. Yet another new theme consists of spaced out synth waves, raising the volume and intensity level, that are simultaneously ominous and meditatively moody. Kudos to Al for captivating thematic development throughout!