it is HAPPENING again 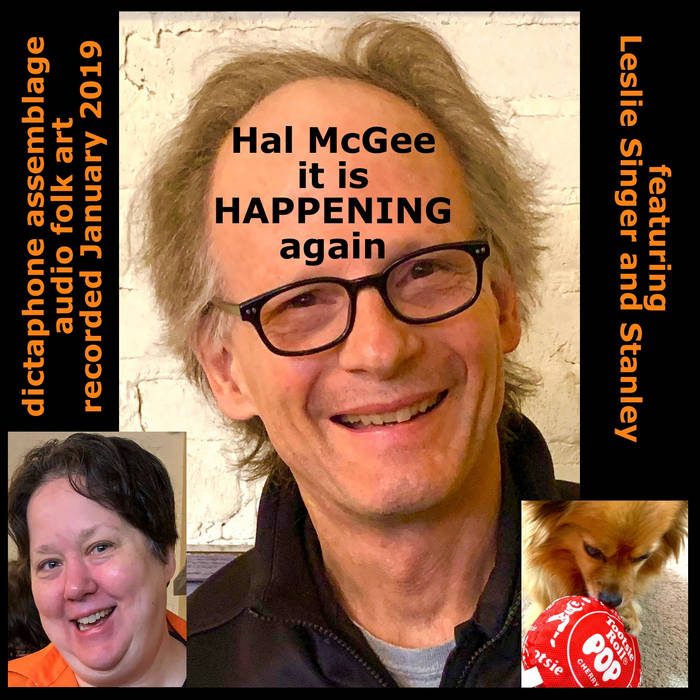 visit a special album information page where you can view a slideshow of 65 photos by Hal and Leslie:
www.electroniccottage.org/hal-mcgee/it-is-happening-again

"it is HAPPENING again" is intended to be and ideally should be experienced as one continuous 78-minute audio assemblage. For the listener's convenience and to make available access points within the assemblage I have broken the assemblage into four sections at arbitrary points and have assigned titles to the parts. Also, the entire 78-minute piece exceeds Bandcamp's upload limits, dammit!

I carry a Sony ICD-PX470 stereo digital dictaphone (I own four) in my pocket wherever I go and I made recordings every day throughout the month of January 2019. Leslie Singer used a ICD-PX470 of her own to make 28 recordings during January and sent them to me. I loaded her recordings onto one of my four dictaphones (along with recordings I made on that dictaphone). On January 31, 2019 I played all four dictaphones through a Xenyx mixer directly into Audacity on my desktop iMac computer and captured the mix of the recordings collected on the four dictaphones with next to no tweaking of the sounds as the assemblage unfolded and created itself.

In this assemblage you will hear many different sounds from my daily life in the month of January 2019, along with spoken and performed and everyday sounds by Leslie. Some of those sounds include:
spoken word poems and texts, instrumental improvisations, sounds from Apartment Music shows #32 and #33, Stanley barking (no kidding!), me (and Leslie) taking Stanley on walks, conversations, restaurants, sounds from my job, watching some of Leslie's videos from the 1980s, gadgets and noisemakers, Jiblit Dupree and Leslie jamming on guitars, excerpts from Girls On Fire's first new performances in more than three decades, Leslie reading her recollections of the Apartment Music shows, construction sounds, emergency vehicles, and much more!
Thanks to Adam Naworal for contributing some great spoken parts about "collages within collages"!