A Series of Lifestyle Circumstances

by Centipede Farmer and Hal McGee 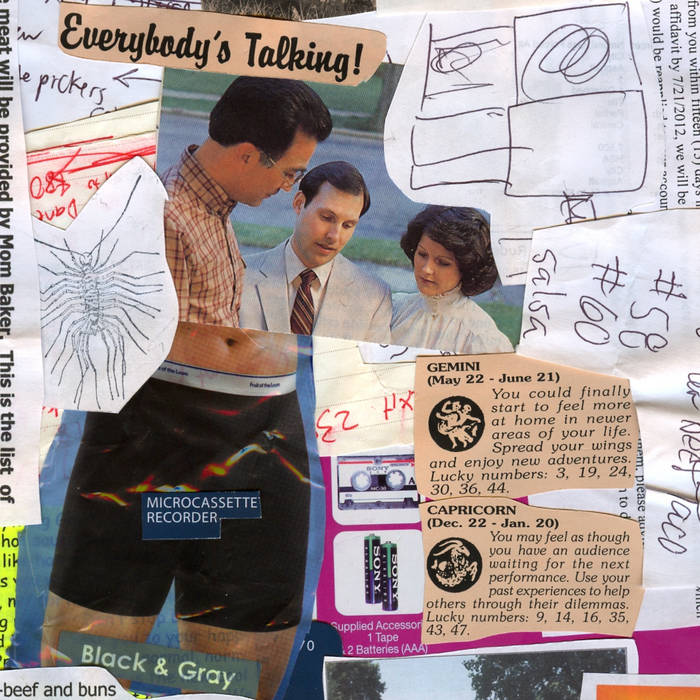 A Series Of Lifestyle Circumstances is a microcassette duo collaboration by Centipede Farmer and Hal McGee. Centipede Farmer recorded 60 minutes of sounds on a microcassette in June and July 2012 and mailed the tape to McGee, who recorded 60 minutes of sounds in July and August. Without listening to either source tape first, McGee then mixed Centipede's tape with his and improvised a simple mix, with a minimal amount of panning, directly to Audacity, on Sunday, August 5, 2012. The two 31-minute collages were then split into a total of nine separate tracks.

Here is a list of Centipede Farmer's sound sources:

- Mixtape Alpha played through computer speakers at my work
- Answering machine messages to and from my dad, 1990s sometime
- Cicadas in tree outside my apartment, and passing traffic
- Me improvising on acoustic guitar while my wife Leah and her friend Dan reminisce
- My dad's microcassette notes to my mom on business matters, during a home inspection, 1990s
- Can and bottle crusher machines at the Valley West Hy-Vee
- Mixtape Alpha and Monotron Duo jam through computer speakers on my deck with cicadas in the background, interrupted by Leah
- My son Wesley playing with toy monster trucks in the dirt
- Wesley whining about something random, then being tickled
- The voice response system of my credit union on payday
- Bedroom sludge jam on Casio SA-21 drums & bass guitar with looper & effects
- Me and my old buddy Zeke goofing off at a gig, early 2000s
- Me reading weird spam discussion board robo-posts
- Bedroom no-input mixer jam
- Old recording of a couple guys jamming on drums and slide banjo in Cedar Falls, early 2000s
- Bedroom space noise jam with old 4-track tape, tape-scratching, Casio SA-21, looper & effects
- Wesley watching videos of monster trucks on the iPad
- My friend Chris rambling drunkenly about my thin comedy material and something political, early 2000s
- Me playing an increasingly deconstructed version of "Return to Sender" on acoustic guitar
- Cop Bar performing the song "I was curious who would fix the Sewers after Society Collapsed so I Voted for Ron Paul" at The Space For Ames
- Another bedroom jam with looper and Casio SA-21
- My sister Sarah giggling while her late dog Shadow growls at something, early 2000s

Here is a list of Hal McGee's sound sources:

- sounds from Action Research show #93, July 26, 2012, at Display, Gainesville, Florida, including the voices of Dan Reaves, Andrew Chadwick, Frog and others, and excerpts from performances by Frog and C.A.N.S.
- cardboard compactor machine, various alarms, Automatic Teller Machine sounds, dog squeaky toys
- sounds from my job, including the voices of co-workers: they like it on the bottom; I sure am glad we get paid next week; I’m gonna give her an in-service; I’m gonna be a diva; like a popsicle on a stick; like a biscuit sopping up gravy; pot, wine, liquor - it’s not a problem as long as it doesn’t cause a problem; how does that work, that the mother is younger than the son?; better quit smokin’ that dope; my nuts fell on the floor; my smoked sausage is bun-size
- jams on Yamaha PSS-470, Casio MT-47, circuit bent Casio SK-1, and rubber band
- ordering and paying for food and coffee at various restaurants, cafeterias, coffee shops, and grocery stores, including cash register sounds
- talking to people at the bus stop before work, and neighbors
- sending packages at the post office and complaining about the post office
- sounds inside my pants pocket and brushing my teeth
- excerpts from a jam session with Mark McGee on drums, A.J. Herring on bass, and me on electronics
- talking with my parents, including he smiled and waved at me like he knew me
- talking to Gracie Blue The Dachshund and she sings and moans, and Pet Rescue adoptee dogs barking
- me singing the hits