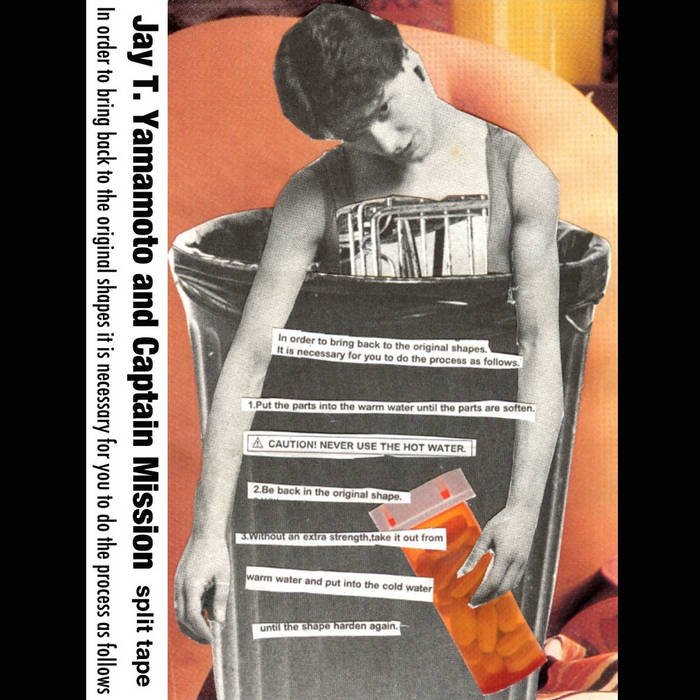 HalTapes presents
Jay T. Yamamoto and Captain Mission split:
In order to bring back to the original shapes
it is necessary for you to do the process as follows

- "The alleged castration of Rudolf Schwartzkogler" and "The transgressive autoeroticism of Günter Brus" are noise improvisations based on the famous works of Viennese Actionism. They are not so much direct interpretations of those works as they are my abstract impressions of those works reduced to pure psycho-acoustic expression.
- "Version (version)" came out of a series of experiments in pure "ambient" music (i.e. music not meant to be directly listened to) based on a glitch in my Casio keyboard that caused it to freeze up while producing a continuous tone. I added an electronic "beat" and some musique concrète noises to turn it into a proper "song".
- "Dirty Mary's Acid Test in Scissors Land" is an experiment in trying to get back into doing more long- form songs. Structurally it's based on Pink Floyd's long suite-like songs - "A Saucerful Of Secrets" in particular. Though there's also an Amon Düül influence in there as well. The title is a reference to an especially psychedelic episode of the original (1970s) "Cutey Honey" - I think it was episode 5 or 6.
- "Unfinished Landscape #2" is an out-take from "TSOLF" that I found while going through my tapes to see which ones were okay to recycle. It's an unfinished song in the "Hallucinated Landscape" series. Despite its incomplete state, upon hearing it again I thought it worked well enough on its own and wanted it released here.
Summer 2014 except "Unfinished Landscape #2" (2013)

Captain Mission
Track 2. - Side B of the tape
everything that is taken into parts by the acid, the first thing seen is a very small bubble beginning to come out of the matter.

If you like In order to bring back to the original shapes it is necessary for you to do the process as follows, you may also like: