by Crank Sturgeon and Hal McGee 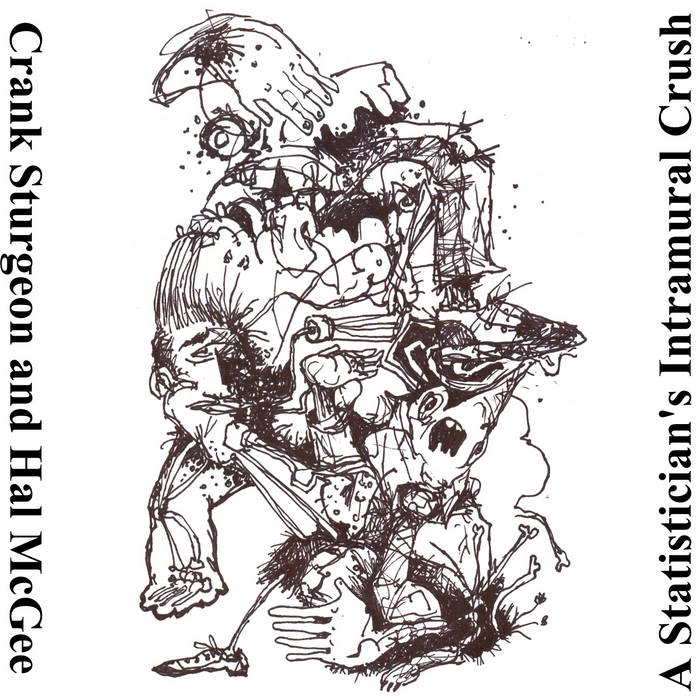 A Statistician's Intramural Crush is a collaboration by Crank Sturgeon and Hal McGee consisting of field recordings, minimalist instrumentation, improvisational textures, stream of consciousness spoken word mind glop, and lo-fi gloriosity. Tape on tape on tape on tape with hissy lump thrill peaks, stringy whack, numbers, ensue the wondermint of 3 point 5. If you are looking for adventure in sound you will here it hear. Reel to unreal.

Hal McGee recorded his sounds in February 2013 on a Sony M-470 microcassette recorder, and on March 7, 2013, he improvised a mix of Crank Sturgeon's tape with his tape without listening to Crank's tape first.

True to the sprit of the project, I did not listen to your tape before doing the improvised mix of our two tapes.
Not only that, I didn't open up the protective packaging around your tape until just before doing the mix. You can imagine my surprise and alarm to see that the top of your lil microcassette tape was crushed! Yikes! Little pieces of plastic crumbled and fell off of the top edge of the tape shell as I took it out of its wrapper.
I trusted the microcassette gods, however, and forged ahead.
I loaded your tape into one microcassette player and mine into one of an identical model. After about one minute your tape stopped. More yikes.
I remained patient and trusting. I rewound your tape and tried again.
The mix sounded wondrous indeed. I was greatly pleased. At about 25 minutes into mixing the A-sides of the tapes your tape stopped playing again.
I decided that I had better get Side B mixed before your tape completely disintegrated. Flipped your tape over, rewound to the beginning of Side B, did the same with mine, and improvised/witnessed another splendid audio experience. There are many magical moments where it all comes together so nicely and sounds pre-composed, intended to sound that way. Really quite successful in my opinion! In any case, your Side B went all the way to the end of the side, which for some odd reason only comes to 28:00 instead of 30:00. Hm. It didn't sound like your tape was fast, speeded-up, chipmunked.