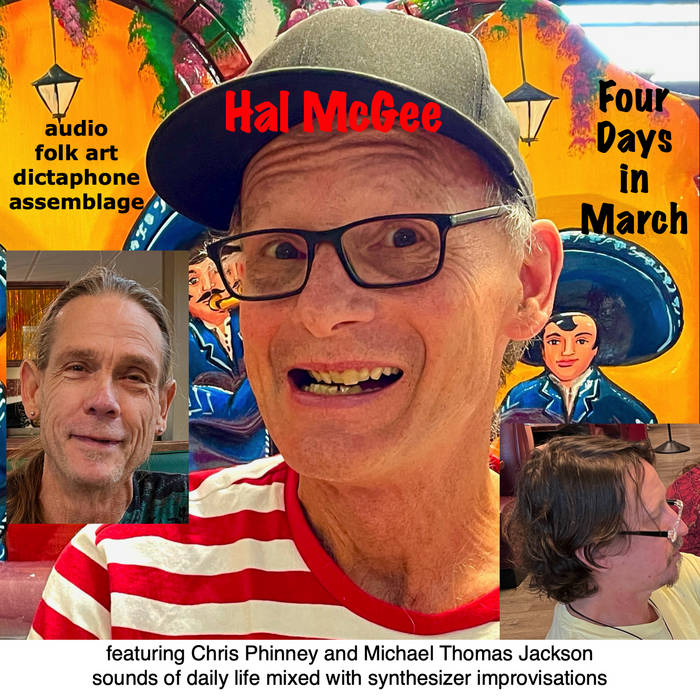 * featuring Chris Phinney and Michael Thomas Jackson *
Four Days in March is a joyous celebration of friendship and an immersive audio experience created with love for you!
audio folk art dictaphone assemblage
recordings of everyday sounds mixed with synthesizer improvisations
recorded with three Sony ICD PX-470 stereo digital dictaphones
Friday, March 4th through Monday, March 7th 2022
during Phinney's and Jackson's historic visit to Gainesville Florida
and featuring miscellaneous sounds from Apartment Music 42 and 43
including synthesizer improvisations by Phinney, Jackson, and McGee
with additional synthesizer sounds by Lumen K
with voices and other sounds by:
Stanley, Chris Phinney, Michael Thomas Jackson, Lenny Pearlman, Lumen K, Maggie-Wynn Magpie, Danny McGuire, Jason Irvin, and other participants of AM42 and 43, plus my mom and dad, Harold and JoAn McGee.
Conversations while drinking numerous cups of coffee, during recording sessions, at Apartment Music shows, and while eating at restaurants, such as Indian Cuisine Buffet, La Pasadita, Metro Diner, 4 Rivers Smokehouse, Kabab House, 43rd Street Deli, and BurgerFi.
Also with sounds recorded on Friday morning and afternoon before Phinney's arrival, at the Gainesville Regional Airport, while taking Stanley on walks, and in Micanopy, Florida including the cemetery, plus in Hal's pants pocket.
Special credit goes to Lenny Pearlman, who suggested two of the track titles.
Included is an excerpt of Jiblit Dupree's performance of "I Always Fuck It Up" at Apartment Music 42.
The photo of Hal on the cover is by Chris Phinney.