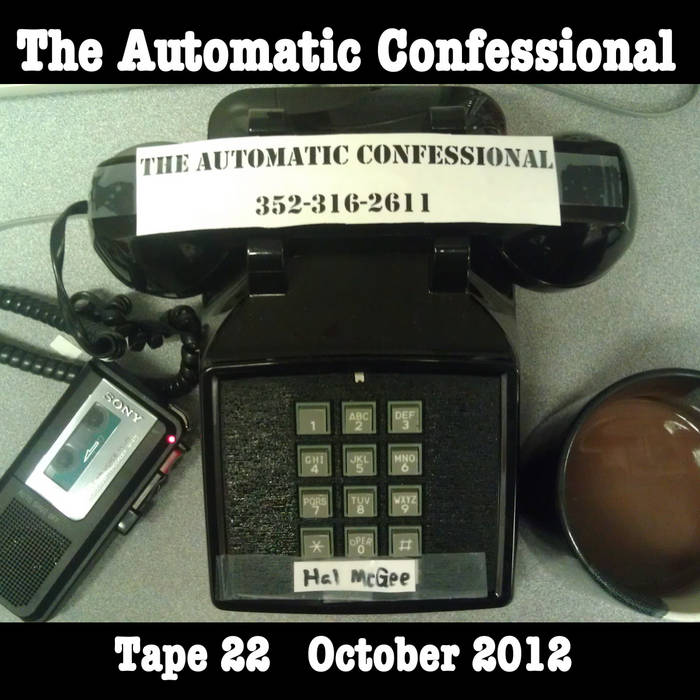 Many of the currently available volumes of the Automatic Confessional can be found at the Internet Archive.

This is the first new 60 minute tape of voicemail messages of the newly-revived Automatic Confessional Project - Tape 22.
the ultimate lo-fi answering machine compilation project is back!

AUTOMATIC CONFESSIONAL VOICEMAIL PROJECT - ANYBODY AND EVERYBODY WELCOME TO PARTICIPATE
by Hal McGee on Sunday, October 21, 2012 at 8:33am ·

Call The Automatic Confessional and leave a one minute message of any words and sounds that you want.
the telephone number is:
three five two three one six two six one one
Anyone and everyone are invited to participate!
Tell all of your friends!

The messages will be transferred to microcassette and will be published online.

You can leave a message of any sort, of any sounds, or words, or thoughts that you choose, with absolutely no restrictions on content.

You may leave a message ANONYMOUSLY, of course.

This is the bumped, renewed, revived version of the Automatic Confessional Project.

The Automatic Confessional was originally created and curated by Hal McGee from August 19, 2009 through March 2, 2010. Anyone and everyone was invited to leave a one minute message of any sounds, content or sort on Hal McGee's microcassette answering machine.

---
TO BE CLEAR: Unlike the first phase of the project from 2009-1010, this time I am not using a microcassette answering machine to record your messages. You will leave your messages on the voicemail of my cell phone. I will transfer these messages to microcassette via playback through my cell phone's earpiece. Then I will transfer the microcassette tapes to Audacity and then publish a tape online every time that I receive enough messages to fill up a 60 minute tape.
Same basic concept, though!