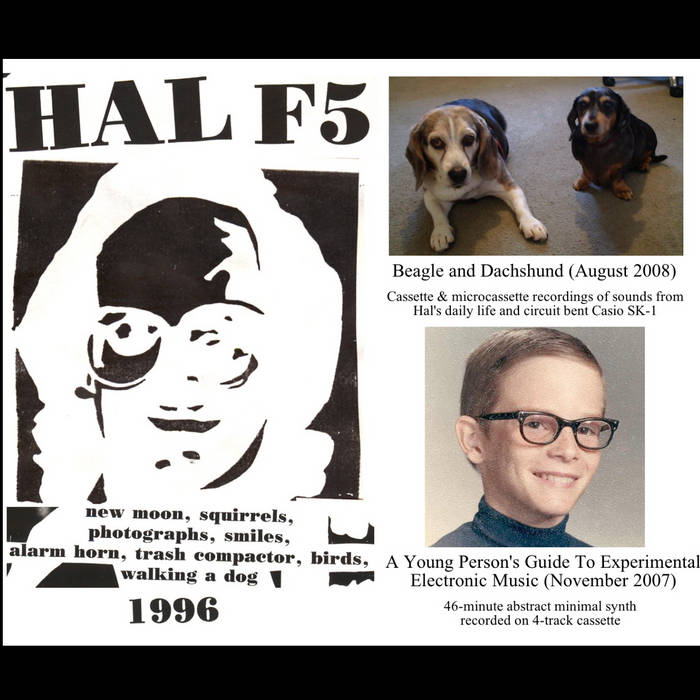 F5
Crunchy noisy layers of field recordings of a huge trash compactor and an intrusion alarm horn with insertions of answering machine noises and messages, phone conversations, and a special spoken message from me to Joe Roemer of Macronympha. F5 was originally released on cassette on the HalTapes label in 1996.

A Young Person's Guide To Experimental Electronic Music
Recorded in November 2007 by Hal McGee in his home studio in Gainesville, Florida. It is a 46-minute free form abstract minimal synthesizer piece created on a Fostex X-12 four-track cassette recorder, employing the following gear: Custom Black Edition Little Boy Blue analog synthesizer [by Flower Electronics], Technosaurus Microcon analog synthesizer, Moog Micromoog analog synthesizer (on loan from Jay Peele), circuit bent Casio Rapman [bent by Daniel Park], circuit bent Casio SK-1, Alesis Microverb III digital reverb (used during mastering/mixdown), and Behringer Eurorack UB802 mixer (for EQ and volume adjustments during mastering/mixdown). Mixed down directly to CDR, on a stand-alone RCA CDRW140 CD Recorder. The unique idiosyncratic character of this recording is due in great part to the cassette medium and the Fostex machine on which the raw materials were recorded. I used no outboard effects such as delay, distortion or reverb during the creation of the four raw tracks. The Fostex 4-track lends to this music an unmistakable colorful tape distortion which couldn't be found on more expensive and/or digital gear. I am proud of this piece of work and there is not a lot of this kind of highly-idealistic electronic music being produced these days.