by Girls On Fire / Hal McGee 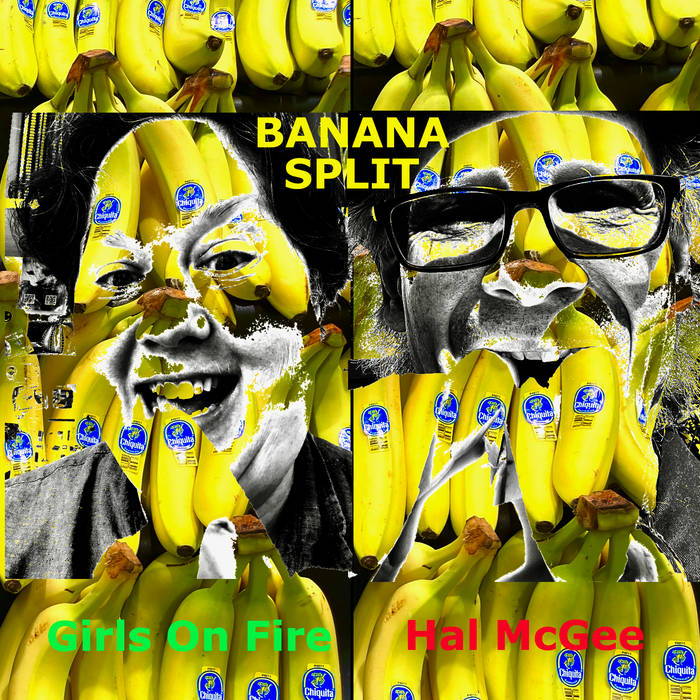 Dedicated to the memory of Dave Fuglewicz

Leslie would also like to credit Oliver Harris, Simon Reynolds,
Starship and The Residents' The Third Reich 'n Roll for lyrical inspiration.

Tracks recorded from January 2019 through July 4, 2021 with the help of a Sony microcassette recorder M-560V and two wonderful Sony ICD-PX470 digital recorders.

Special thanks to Hal McGee for inviting me to do this split album with him and for being such an inspiration and guiding light. And much love and appreciation to all of my fellow ECers! And a special shout out to Daisy!

recorded with four Sony microcassette recorders, June 2021
— co-starring Stanley — with the sounds of — spoken words by me, Lumen K's voice, shortwave radio, neighbors, scags and hustlers, co-workers, thunderstorms, the UPS truck, hipsters in black clothing with sunglasses, electronic monitors, cable mistake, rrrrrrrrrrrrr, mockingbird, who am I to say?, Stan is alone only 11 hours on three days a week, microcassette assemblage environments, ice cream truck tunes, the one thing wrong with my 2-string pink dumpster guitar, Keema Aloo Mattar, in an alternative historical fantasy reality, will you be my Pirate Robot Lover?, two string pink dumpster guitar, freedom from fear, could and will and did survive 2020, real American coffee served here, this is MY microcassette recorder!, Happy Birthday to You!, See Something Say Something, "I got my Grizzly!" ...

On August 9, 2021 BANANA SPLIT was included in the list of "The Best Experimental Music on Bandcamp: July 2021 -- daily.bandcamp.com/best-experimental/the-best-experimental-music-on-bandcamp-july-2021

Here is the review by Marc Masters:
Leslie Singer—who records as Girls on Fire—and Hal McGee are legends of the cassette underground. Both have made unpredictable audio work on tape since the early ‘80s, and they’ve been friends and supporters of each other for nearly as long. For a new split release, Singer blends sound art with musical homage and parody. On the 28-minute “I Want to Bodysurf in Vomit,” she mixes absurd songs, repetitive beats and samples, and comically-timed references to pop music into a dizzying aural amusement park ride. McGee’s approach to audio is more documentarian. He often carries a microcassette recorder around with him, capturing environmental sounds and his own verbal musings. His piece “Super Action Microcassette Assemblage” is a vintage example of this self-created form, as he injects self-aware references to his own process into a voice-in-head pastiche of mysterious speech and noise.