by Walls Of Genius 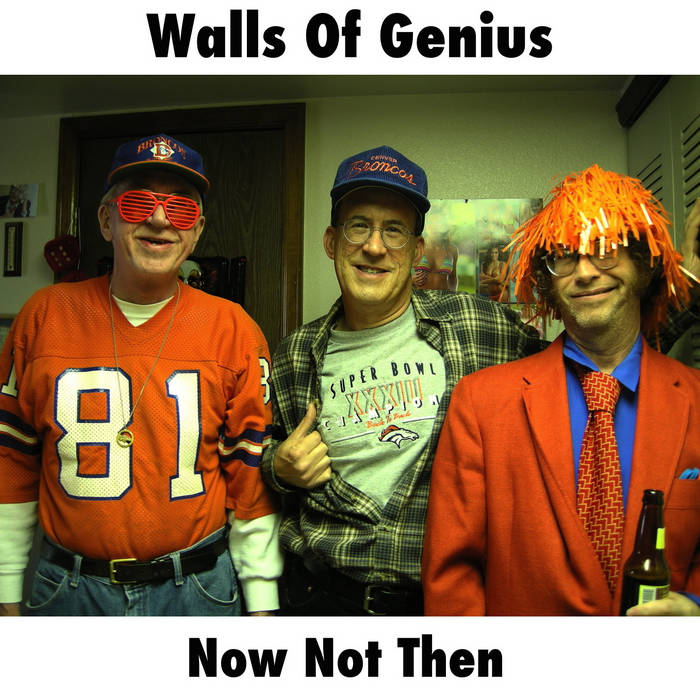 HalTapes presents
Walls Of Genius
Now Not Then

1980s Cassette Culture anti-heroes Walls Of Genius are back with their first album since 1986! Evan Cantor, Little Fyodor, and Ed Fowler present 90 minutes of all new material --Classic Rock turned upside down on its ear, scintillating reinventions of 1960s moldy oldies, and free improvisational dementia. Not for all tastes, you'll either love it or hate it. Prepare to be wowed by masterful musical feats of genius! Also prepare to be disgusted, amazed, and just downright perplexed.

This represents the first fabulous WoG reunion session ever
May 16, 2014, at Beachfront Studios, Boulder, Colorado
(c) 2014 Walls Of Genius

Originally released on cassette in July 2014
on the Kassette Kult Tapes label, K7KT 002.

From 1982-1986, Walls Of Genius (WOG) represented everything that was totally twisted and creatively cool about that era’s homemade music cassette culture underground. These guys were all over the map, recording songs, acid rock, spaced out excursions, avant-Prog, sound collage and abstract experimentations. And nobody did cover songs like WOG. Now Not Then consists of the first WOG reunion of Ed Fowler, Evan Cantor and Little Fyodor since 1986, and across two discs offers up heaping doses of pent up creative muscle flexing that has been lying dormant in the intervening years.
- Read Jerry Kranitz's complete review of Now Not Then at the Aural Innovations blog:
aural-innovations.com/blog/2014/12/walls-of-genius-now-not-then-haltapes-2014-2-cdrdownload/