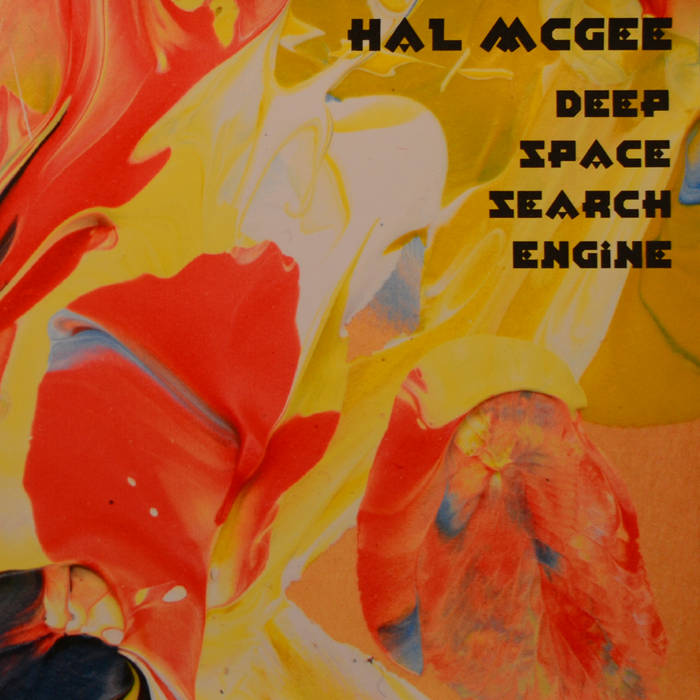 Notes by Hal McGee:
My method of composing the music on this CD was exceedingly (and deceptively) simple. Mostly using a cheap polyphonic synthesizer with a sustain pedal (and also a Moog synthesizer), I set up long drones of just two or three notes. These sounds were processed through a delay unit, with just a little tweaking and twiddling of the controls. I recorded the tracks on a 4-track cassette recorder. As I laid down each new track I never listened to what I had previously recorded. I was fascinated by the interplay of the tones, and of the track layers, and how they phased in and out with each other in a myriad ways. I just love stuff with a lot of details. If you listen to this CD at a fairly low volume it will work as an ambience, a general atmosphere. Turn up the volume, past where you would normally listen to music -- and you will hear a whole world, perhaps a whole galaxy of sound worlds. Macrocosmos or Microcosmos?

Review of Deep Space Search Engine by Jerry Kranitz in the July 2002 issue of Aural Innovations:

'The aptly titled Deep Space Search Engine is Hal's newest release and is among the most purely spaced of the music I've heard from him. The opening and closing tracks - "To Travel In Space You Must Leave The Body" and "Radio Interference Grid" - recall the glory days of electronic Krautrock but all within a very "Hal" context. The former features space electronics with several parallel and intertwining patterns that develop very slowly . The mechanical minimalist aspect reminds me a lot of Neu!, and the few discernible melodies have a Kraftwerk sound, though there are some dreamier elements as well. "Radio Interference Grid" is similar but with a modest "rock" element that brings to mind a blending of Neu!, Tangerine Dream and Amon Düül II.

Most of the remaining tracks are similar but the focus is more on the gradual development of the minimal patterns, though "Oscillating Universe" does include bits of old time Krautrock and prog keyboard sounds. But with "Comet Ikeya-Zhang" we're getting more into what we'll call "classic Hal" territory. We're traveling on the tail of the comet and it's a raucous ride indeed. But then again you wouldn't expect to meditate while riding coach on a comet would you? It's full of slowly developing layers of drones, space waves, and noise. Yet despite the grating sounds it all still comes across as being very cerebral and ultimately accomplishes (though some will disagree) what space ambient music does. We'll call it noise-ambient. Overall an excellent set and a great starting point for the curious but tentative among you who would like to get their feet wet in Hal's music.'