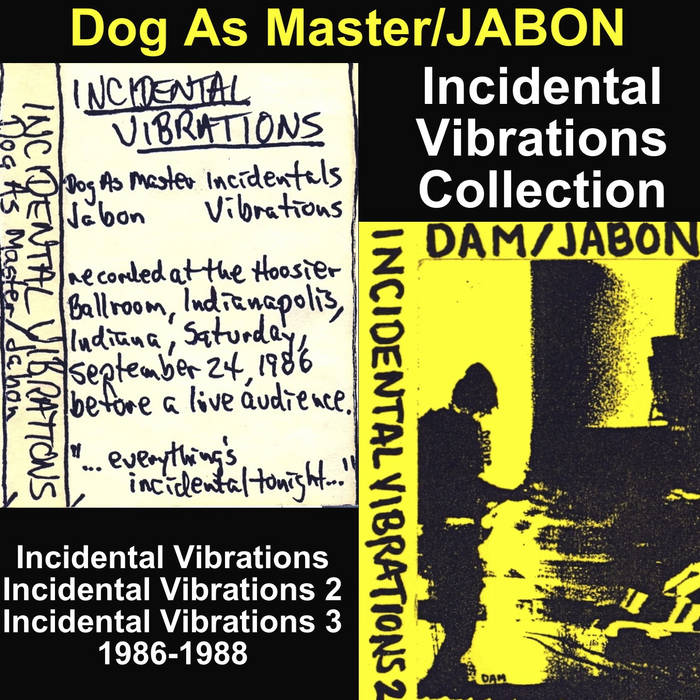 Incidental Vibrations 1
1. Everyone has to take The Big Trip
2. Rock And Roll...

Incidental Vibrations is a live recording from September 24, 1986 at the Hoosier Ballroom in Indianapolis, Indiana. Totally improvised ultra-minimalist on-the-spot stream-of-consciousness free association dada fluxus deconstructed rock music performance art comedy farce by Hal McGee (Dog As Master) and the legendary and mysterious quartet Jabon, who hail from Stinesville, Indiana. A cautionary tale about the pitfalls of ingesting hallucinogenics before a live performance. Not for all tastes - proceed with caution. An extension of some of the deconstructed rock "techniques" on 60 Minutes Of Laughter. Contains curious references to Symbolic Accidents Of Ceremony by Bwana Dog; cigarette butts, diet soft drinks, club sandwiches, bats (the flying kind), the Marquis De Sade, the TV show Dallas; and innumerable decontextualized blues and rock "gestures" and riffs. All notions about "content" are stripped away and live performance is reduced down to the level of a free-form automatistic collage of random incidents, non sequiturs, and thoughts about nothing in particular. Audience reactions and laugh tracks were NOT added on after the fact. Originally issued on C20 cassette on the Cause And Effect label.

Incidental Vibrations 2 was recorded at the Adamson Wing, Baker Hall, Carnegie-Mellon University, Pittsburgh, Pennsylvania on Saturday, May 16, 1987, before the Dog As Master set (Dog As Master Live In Pittsburgh). This is what happens when you smoke too much marijuana. Comedic, trashy deconstructed industrial rock music performance art. Originally issued on C20 cassette on the Cause And Effect label.

Incidental Vibrations 3 was recorded live on stage in an automobile on an unspecified date in 1988 in Pinellas and Hillsborough counties, Florida.