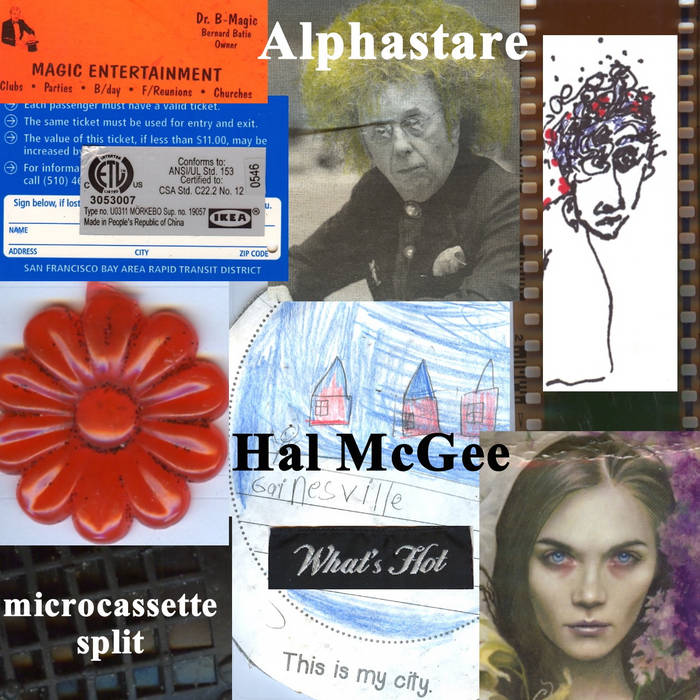 Street/bus sounds, Happened to be walking by a club on my way to the studio and heard this Filipino band soundchecking doing a Simon and Garfunkel cover (only in the Bay Area!), Bodega sounds, Arrival to studio, Studio sounds (listening to rough mixes of Andalusia Rose recording), Loops/Synths/Samples Monotron Delay (metal sounds and chants from vinyl of Gyoto Monks), Samples/Loops/Animoog, Loops/Samples Animoog/recording of brass band on BART (Bay Area Rapid Transit)/ Acoustic Guitar

Track 2
Hal McGee
Everything That You Could Possibly Imagine

The usual stuff:
Stanley, talking with neighbors and relatives, black stain on a pillar, big display, it’s always better to give than to receive, at the pharmacy, Best Buy dumbfuck, please seat yourself, Mexican restaurant, I float the recorder in the toilet water, employee pumping rooms, everything that you could possibly imagine, penetrate through space, save the ta-tas, Xmas carol singalong, up all night out back there, at the groomer, $100 in the bank, big fluffs

For his side of this split, San Francisco based audio artist Alphastare assembled a variety of incidental sounds and provides some fun descriptions of those sounds, including… I got a kick out of this one… “happened to be walking by a club on my way to the studio and heard this Filipino band soundchecking doing a Simon and Garfunkel cover”. Another interesting lo-fi assemblage of day in the life ephemera, much of it pretty cool musical bits that I assume is in the studio Alphastare was on his way to. I especially like the spacey UFO synth workout accompanying a simple repetitive melodic riff.

Hal picks up on the humor of Alphastare’s descriptions by listing his collage toolkit as “The usual stuff”, including Best Buy dumbfuck, I float the recorder in the toilet water, save the ta-tas… fun stuff indeed, and sure enough this is trademark Hal, who I’ll wind down this article by saying is in my opinion the master of the diarist audio collage. Hal goes about life in the ho hum way that most of us do, but manages to offer slices of his life, via audio art recordings, in ways that are both interesting and fun.

One of the standout aspects is Hal’s voice, which is very distinct. But he also interacts comfortably with others, and the exchanges, which range from banal to interesting, are often downright hilarious. Having heard a large number of these over the years, my favorite recurring conversations are those he has with a particular female co-worker, which can be hysterically funny. But at the end of the day it’s the characteristically Hal way it’s all stitched together that makes these the audio artifacts that they are.