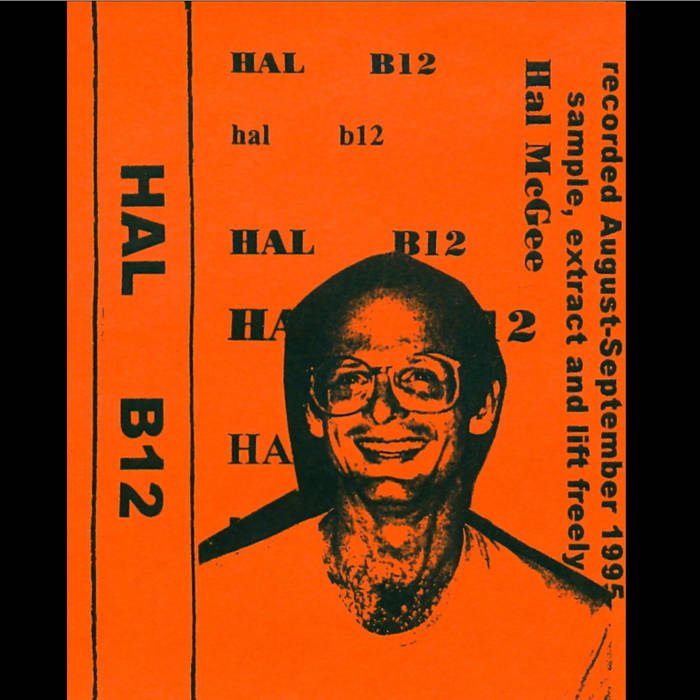 After my three year hiatus from recording (92-95) I noticed that a lot of noise artists were doing special deluxe package releases. It seemed like every fuckin' release by Aube had like a dead fish attached to it or a pubic hair or a bag of sewage water or some such shit with deluxe printed sleeve, etc etc etc. I purposely made the cover of my "B12" cassette as shitty and amateurish-looking as possible and I fit four of them onto one sheet of paper so that at Kinko's each cover would end up costing me like 2.5 cents. I sent a copy of "B12" to Aube as a trade and told him here is my "anti-deluxe two and a half cent cover". He was not amused and told me he would not trade with me again. This is the same young upstart who had told me previously that I had been one of his influences from the 1980s. Hahahaha. Uppity bastard!

Originally released on cassette in 1995. "Hal McGee's first solo work since 1988. A self-described mix of post, pre, dis, un and de- constructed space noise and ambient industrial. If that's just enough to confuse you it's a perfect description for this excellent bout sonic assembly. McGee delivers fat, noisy, crashing barrages alongside analog ambient space pieces and makes it work. At times a seemingly haphazard piecing together of the master destroys whatever groove develops, but that's half the fun. I was impressed with the clean, solid recording -- this stuff really sounds huge. Certainly for braver souls up for the challenge but not inaccessible to those sneaking a peek. Go ahead, give it try." Reviewed by Bryan Baker in Gajoob, 2/18/1996.