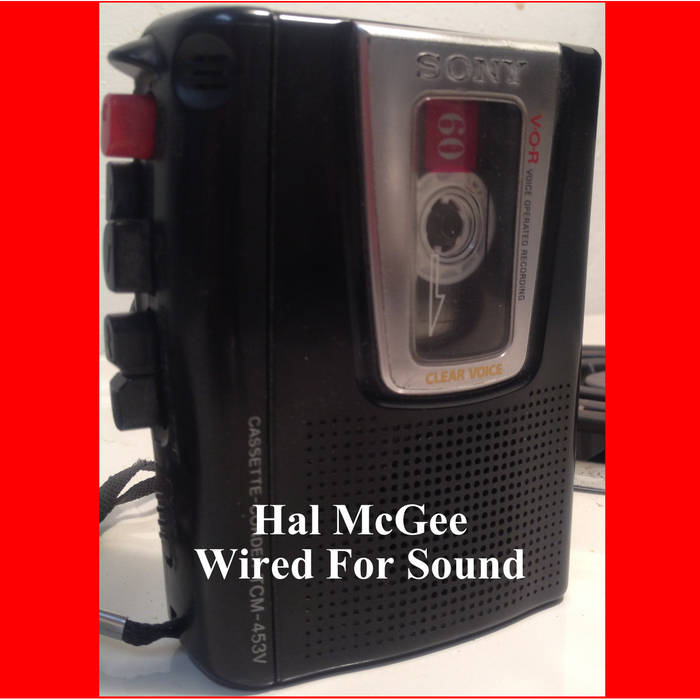 Wired For Sound is one of my favorite recordings in my catalog and in many ways is a seminal Hal McGee audio work. Presented here for the first time ever online, Wired For Sound was originally released by Phil Klampe on his 6 On The Dot label, on homemade CDr. Recorded in its entirety on a Sony Cassette-Corder TCM-453V handheld mono cassette recorder, using only the built-in condenser microphone - TDK D Normal Bias tape ->> March-April 2000.

Here is a review by Jerry Kranitz in Aural Innovations # 19: "...the disc opens with Hal stating, "Sounds on a tape. Sounds on a tape". And that's precisely what this is... sounds on a tape. We hear Hal's spoken word, we join him in the bathroom, hear him in conversation with his niece and others... loads and loads of pasted together field recordings. I remember when I was little my grandfather had this old reel-to-reel and I'd record for hours, getting something similar to what Hal has of his niece. I'd go on endlessly about imaginary friends and such, but in my teen years my grandfather made the mistake of giving me and my sisters the reel-to-reel and all the tapes... all of which we promptly taped over. Boy do I regret that now. But I digress. One of the interesting things about Wired For Sound is the (I presume) deliberately choppy way in which Hal edits together the various bits that make up the CD, which gives it a raw quality that makes things a bit jarring throughout and, given that I was listening with headphones, a little dizzying as well. I described hearing something similar on Maps Of Nowhere, though Wired For Sound largely dispenses with the sonic explorations in favor of a focus on words, poetry, and day-to-day sounds and activities. It seems chaotic as hell and I found it difficult to listen to the entire 70 minutes in one sitting, but on a voyeuristic level it's quite cohesive and probably my favorite of all Hal's works I've heard. I felt like I was following Hal around hiding in the bushes as he experiences a typical day, presented against a wildly surreal backdrop."

Here is an excerpt from a review by Swami Loopynanda: "On this CD McGee breaks through to an environment where most listeners might feel a bit uncomfortable. Nevertheless, those audiophiles out there who are truly looking for a unique experience should check this one out. Using only a handheld monophonic tape recorder, Hal pastes together literally hundreds of chunks of found sounds into an exhibition of nothing less than his own everyday reality. All of these rough chunks are separated by the noises of the tape recorder being turned on and off, giving the entire CD a primitive ambience, uncharacteristic of today's technologically washed recordings."