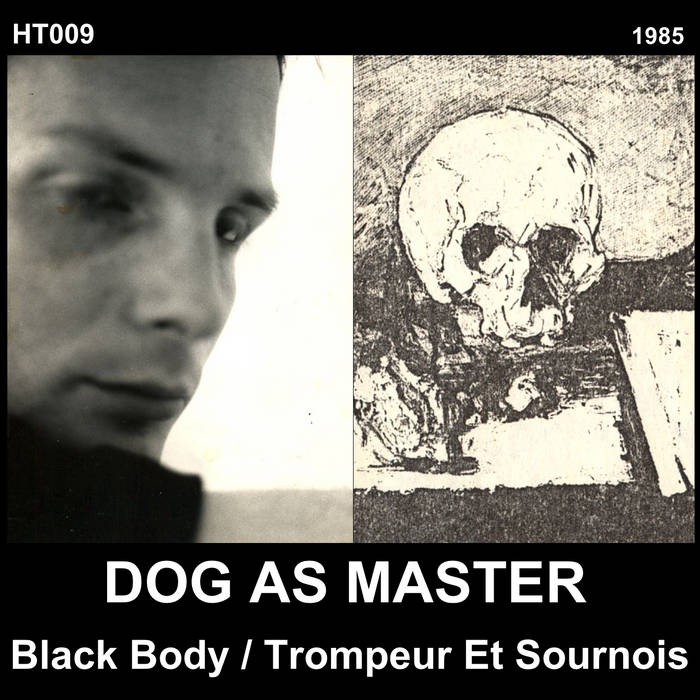 TROMPEUR ET SOURNOIS
Sadistic experimental electronic music by Dog As Master: long passages of near-silence are punctuated by noise blasts at unpredictable intervals. One continuous 47-minute track - Imagine that you are blindfolded and naked, tied to a chair - thumbing my nose, slap in your face, a sadistic twist of your arm and nipple pinch in sound. Over and over again, no matter how much it hurts. It is the quieter parts which make the loud parts all the more painful.

These new digital masters are transcribed directly from the original 4-track cassette mixdown masters from 1985. Overall volume levels have been boosted, and high, mid, and low frequencies have been enhanced for maximum possible sound destruction.


Black Body was the third cassette tape release of Hal McGee's solo project Dog As Master. I recorded this album with a Fostex X-15 four-track cassette recorder. This took me about six months to create.
- Originally released on cassette in 1985, C37, on the Cause And Effect label.

review by Alessandro Aiello, Constrictor, 1985:
"BLACK BODY is a strong suite that has the same serenity and awareness of a powerful precious work even if it's composed of a cluster of sound-noise-music and by a series of pauses, models of sounds. McGee's answer to the high concept of creating a connection with serial electronic music."

A black body is an object that absorbs all electromagnetic radiation that falls onto it. No radiation passes through it and none is reflected, yet in classical physics, it can theoretically radiate any possible wavelength of energy.

Trompeur Et Sournois
Sadistic experimental electronic music by Dog As Master: near-silence punctuated by noise blasts. One continuous 47-minute track, hewn from the same mass of sonic material as Black Body.
- Originally released on cassette in 1985, C46, on the Cause And Effect label; re-released by Freedom In A Vacuum, Toronto, Ontario, Canada (1990).

review by Mike Gunderloy, Factsheet Five, 1985:
"Usually I'm not all that thrilled with experimental music, but I took a shine to this one, perhaps because of its outright obnoxiousness. Most of the tape is somewhere between dead silence and low-level white noise. But the listener who cranks it up will be sorry, because this is punctuated at irregular intervals by blasts of electronic sound. Not easy to listen to, but strangely rewarding."