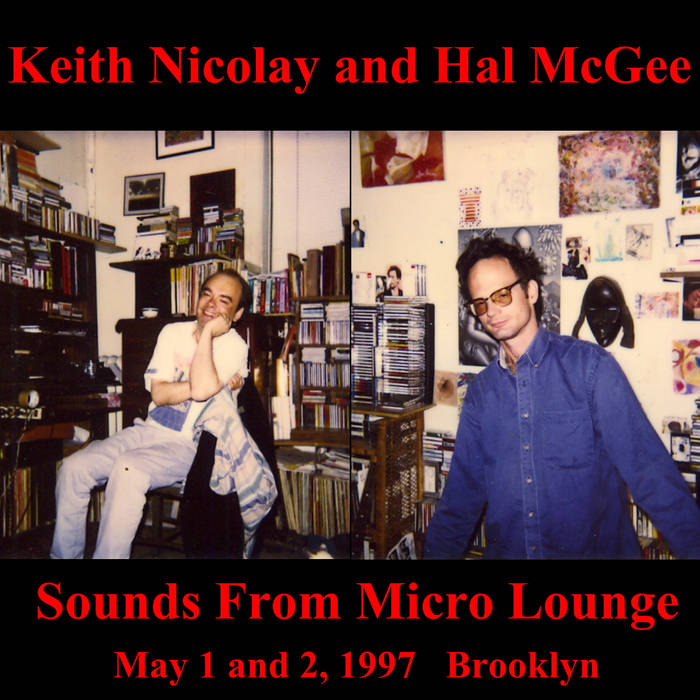 Minimalist free improvisation by Keith Nicolay of Post Prandials and Hal McGee. Recorded at Keith's apartment on 65th Street in Brooklyn, May 1 and 2, 1997.

Keith got out a couple of electric guitars, an amp, his flute and some coins, balls, a drinking glass, silverware and various other household
items to "prepare" the instruments. During the hour-long session I laid on my belly. I scraped, plucked, rubbed, thumped the guitar strings and the pickups. Keith played snatches of flute melodies, plucked & strummed guitar, and spun bits of records & CDs (by John Cage & others). At one point on the tape you can hear the rainstorm through Keith's open window.

Keith remarked that it sounded like a lounge band toiling away, huddled over their instruments on a small, dimly lit stage in the back of a hotel lounge. A race of aliens had crash-landed on one of Jupiter's moons. The survivors knew that it would be 40 years until a relief party came to their rescue. These people, the Micronians, loved music, and since they were to be marooned for a long time they set about making music. Two plucky Micronians, Myxylplyxyt & Ryxylyplyxyt, decided to take on the task of playing & composing music music for the others, even though they had never played music before.

The next morning we recorded another 15 minutes. Keith played some of the tape I'd done with L.G. Mair (6J) on a cassette deck, while we beat on an old non-operational Fender Rhodes electric piano. We laid the guitars on top of the piano to let them catch the vibrations.