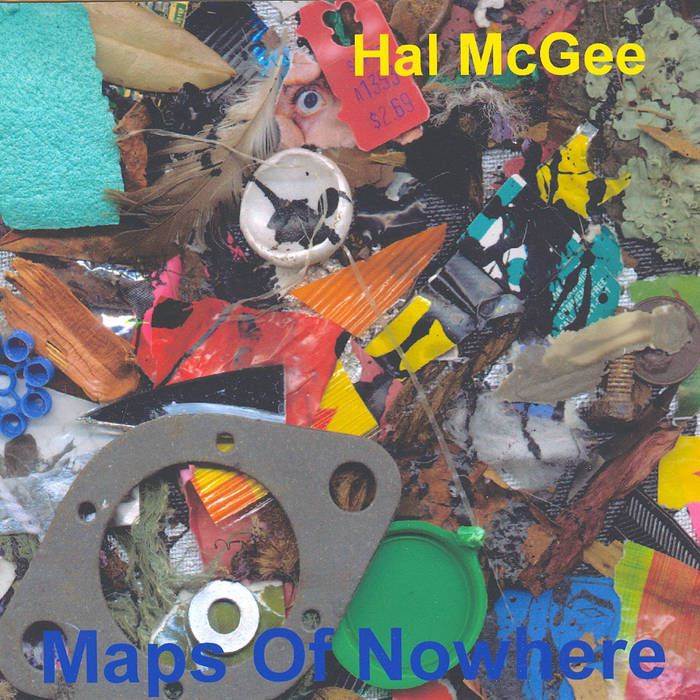 Maps Of Nowhere consists of four long tracks distilled from 12 hours of field recordings made on a handheld cassette recorder - recorded August through October 2000.

I employed chance process, aleatory and automatistic methods of dada and surrealism in the making of Maps Of Nowhere.

Review by Jerry Kranitz in Aural Innovations #20, April 2002:
A collage of noise, voice samples, and in the background early on it sounds like some old American folk or chanting religious song. I hear sirens, traffic, and samples from the radio, implying some distorted urban landscape. But things are at various points in the recording somewhat more tangible as we hear Hal's conversations with people at work and other places. It's amazing how sensitive a tape recorder can be, and the slightest shuffling of objects is as prominent in volume as are the conversations. Though the noise is... well, noise... it isn't grating though it can certainly be brain-piercing. How, you ask, can sounds be brain-piercing but not grating? Well, it's hard to explain but my brain perceives a difference between the two. Grating is when you just have this huge sonic wall of noise all blended together and the listener is completely unable to distinguish between multiple sounds. So even though things get pretty chaotic on Maps Of Nowhere, I feel myself getting involved in Hal's world when I can distinguish and even recognize many of the layers and elements that make up the whole. The voices, the drones, the whistles, the traffic.... and so on. If you're relaxed and let your imagination go then a parade of surprisingly concrete images will formulate in your mind. It's difficult to describe the aesthetics of pure sound, especially when those sounds happen to be a tad harsh.