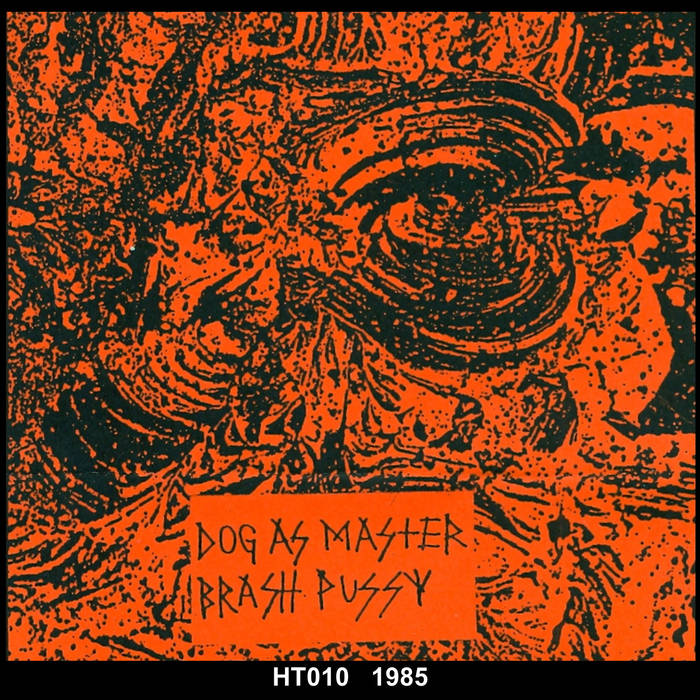 Duncan This work of noise created at a point in history which pre-dates the abundance of digital devices on hand with which to create anything at all gives the overwhelming majority today's noise artists more than just a run for their money. It wipes the floor with them. The sheer brilliance of Side 2 being Side 1 backwards makes this one of my favourite noise works of all time. Almost everything forwards is something else entirely backwards. Favorite track: Brash Pussy, Side 2.

Brash Pussy (1985) is a 30-minute massive sound destruction collage (that prefigured much of today's Noise music) that explodes into chaotic frenzied foaming at the mouth lust-rage. Tapes of Turkish music, synthesizers, percussion, one particularly nasty phrase screamed over and over again (an aural ejaculation of lust, inspired by Debbie Jaffe). Noise filth sound damage with a wry grin. A satire of sorts of power electronics and its concomitant obsessions of perversion, hard sex and sodomy. Brash Pussy was originally released on the French power electronics/noise label 3AP/Le Syndicat, Paris in 1985, and later by Sound Of Pig Music in 1986 as a C59. Side B (part 2) is Side A backwards.

I wanna dedicate this special love song to all of the ladies in the audience.

"Quite simply one of the greatest albums ever made." -- Travis Johnson, Ilse Records, September 18, 2011.

"What a sound! The primal human rage, the emotion erupting through shards of feedback and heavy distortions must be heard as a stunning precursor to such vocal feedback artists as Masonna and Prurient."
-- PBK, 2010.

Review of Dog As Master: Brash Pussy, by Andrew McIntosh
... said to be a "satire of sorts of power electronics and its concomitant obsessions of perversion, hard sex and sodomy". The thing with satire, though, is it is in the ears of the listener. To mine, this is a fulsome, well structured and nicely paced rage of early Harsh Noise, composed of distorted synths, tapes, and vocals - a repeated phrase that's difficult to hear but is apparently "an aural ejaculation of lust" to McGee's one time partner and collaborator Debbie Jaffe. Considering this pre-dates a lot of Harsh Noise by at least half a decade it's amazing how full and layered it sounds. Certainly, the sound is not the kind of up-front, crisp harshness many are used to by now, but nor is it totally mired in low fidelity (contrived or otherwise). There are variations of hissing, gurgling, squawking, moaning and roaring sounds that chase each other and yet give each other space. Interestingly, around the twenty minute mark the volume fades down - not sure if that's deliberate but it sounds as if it is - before fading back up again. The last few minutes towards the end generate some very satisfying grinding electronic harshness. Hal's mood, seemingly a combination of lust and hate, is a timeless theme with Power Electronics, and thus this "satire" is closer to the core than perhaps intended. Certainly there's no attempt to be "Power Electronics" with this, that I hear. It's more a serious attempt to really let out some certain aggression, and it's that realistic honesty that comes forward as the main current. But even leaving that aside, this is grandiose, synthesised Noise that can be appreciated and enjoyed on it's own audial level.
-- review published on Special Interests message board.