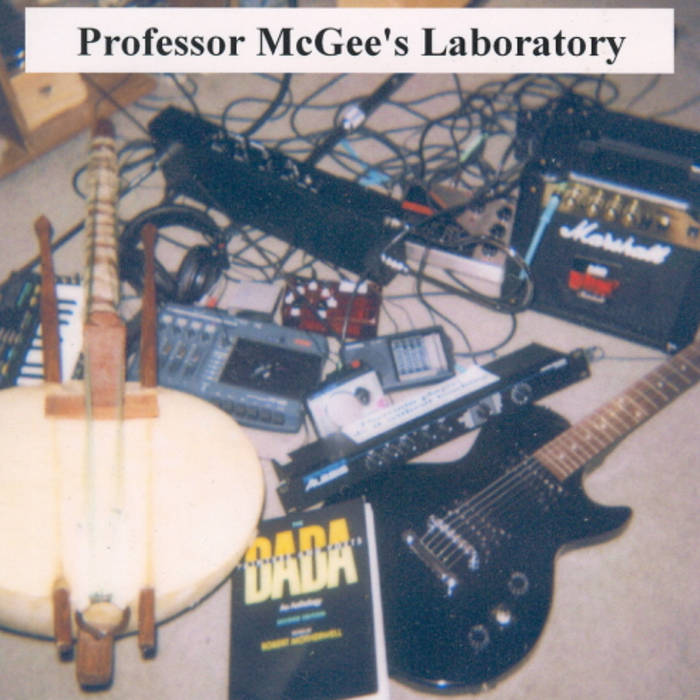 Professor McGee's Laboratory by Hal McGee was originally released on CDR on the HalTapes label in October 2003.

I enjoyed listening to Professor McGee's Laboratory CDR the last two days. It's quite an overload. A condensed version of a month in the life of Hal, in 77 minutes. It is truly a textbook example of modern American folk music. Noise naive school of primitivism.

Professor McGee's Laboratory is a sound art and collage of every-sound-under-the-sun work that will appeal to fans of Hal's My Brain, Wired For Sound, and similar recordings. The CD consists of 5 tracks of almost identical 15+ minutes length, in which Hal does his patented tape recorder as compositional tool thing.

"Crumbite Saliwanchik Topassout" is an electro-acoustic sound collage piece with a Macy's Day Parade full of percussion, strings, accordion, and the usual Hal melee of field recordings that include the sounds of the city and countless other sounds and assorted voices, including his own musings. My favorite parts are where we've got an all-you-can-eat banquet of sounds, music and talking, while the accordion serenades us as if we were having a candlelight dinner in an Italian restaurant that doubles as a performance space. Fun huh? It is! Another highlight segment is where a dissonant Oriental styled guitar pattern fills the lulling accordion role while Hal chats and dense noise waves create a harsh sonic backdrop. We get a similar effect from the piano during a section on "Documentation & Illustration Of My Present Tendencies", which brings a bit of peaceful bliss to a track that includes some of the harshest and most chaotic moments of the set (dig that acid rock guitar). Of course the piano doesn't stay peaceful for long and we later hear bits of the maddened concert pianist sweating with passion as he attacks the keyboard.

I have a fondness for Hal's works that emphasize the sounds of the urban landscape, and "Swamp Operetta With Cricket, Pianoette and Theremin" and "Nothing Else Smells Quite Like It" are characteristic of this area of Hal's sound art compositions. On Swamp Operetta we ride along with Hal as he chats with folks on the bus on the way to his destination. Very much a hangin-with-Hal piece, we journey along hearing every subtle sound that accompanies the ride... conversations, outside traffic, work crews, kids playing, etc... things we probably wouldn't even take note of if we were out and about in the city ourselves. And of course there's plenty of electronics, theremin and pianoette (courtesy of Brian Noring), more of that Oriental sounding guitar, and general sonic aggression coloring the proceedings, as if to create a musical interpretation of the real life activity it accompanies. "Nothing Else Smells Quite Like It" has a similar focus on city life, but also includes a steady stream of Hal's spoken word poetry.

I got a kick out the part where Hal is bewildered over why his shoes keep coming untied and wonders if it might mean anything. See how wrapped up you can get in the details!! And it may be no coincidence that immediately after the part about his shoes we hear Hal talk about how he has endeavored to "develop recording and compositional techniques designed to open up pathways of exploration for the listener". The path Hal has opened offers a wide berth and lays out a warm, fuzzy welcome mat. The rest is up to the listener, the challenge perhaps being not so much the nature of the recording itself as the willingness of the listener to climb aboard and let his/her own perceptions and subjective experience of Hal's work be the guide.